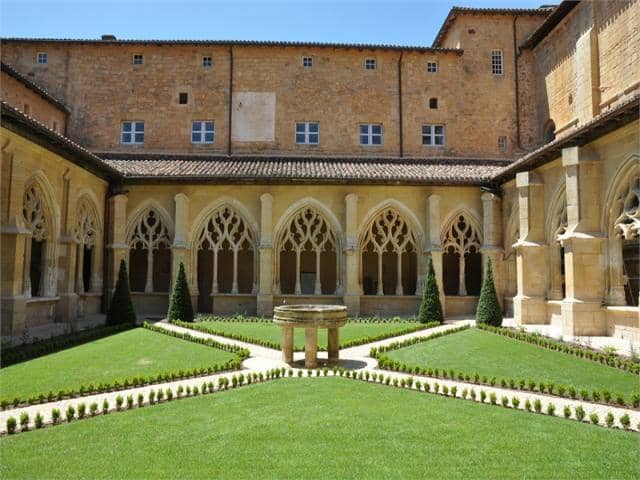 Welcome to the Cloister of Cadouin

This cloister, listed as a Unesco World Heritage Monument, is a masterpiece of flamboyant Gothic art. During this stroll, admire the architectural richness and splendor of the scenery that make this place a universal, unchanging and serene place. To feel the excitement of the place, choose the Night Tour in the summer.

Recommended for children: The Visit "marmosets" and the workshop molding for a discovery as informative as playful!

The history of the abbey and the cloister

The Flamboyant Gothic cloister dates from the end of the fifteenth century. After having undergone a great campaign of restoration of the sculptures, come to discover the richness of the ornaments of the galleries. The Cloister of Cadouin Today is a place where a serenity inherited from its past monastic activity still reigns.

Founded in 1115, the abbey church, the sacristy, and the Romanesque base of the conventual buildings remained at that time. In 1119, the young Abbey of Cadouin became Cistercian in the filiation of the abbey of Pontigny, which was itself one of the four daughters of the city. Eleventh Abbey attached to the order, it will now follow the rule. The flamboyant Gothic cloister dates from the end of the fifteenth century. Cadouin's monastic activity was interrupted in 1790 during the revolution. The one who stops at Cadouin will take all his time to see, in the Cloister the Sun draw with stencils of arabesques of light on the floor of the galleries. Nearly ten centuries of history float here and make Cadouin a universal, unchanging and serene place. Location of many film and TV films.

The tour is free and can be done with an audioguide. At certain times, guided tours are organized. A ticket paired with the Château de Biron is proposed.

Visit of the Cloister with Visioguide:

Discover our Visioguide available in 5 languages (FR, en, DE, NL, ES) with a version in French sign language and a IADV version for the blind and visually impaired. ipod Touch is available for rent on site but also for download.

Stay autonomous during your visit with this latest generation audioguide. It contains audio content, photos, quizzes, panoramas... Very simple to use and very intuitive, you enjoy the touch technology of the iPod touch. Accessible for the whole family, the audioguide is rich in content and will allow you to understand the whole history of the site.

If you have an iPhone or Android phone, you can download the application to your phone and enjoy the 3 tour circuits (Biron Castle, to Bourdeilles And the cloister of Cadouin) for the same price!

Small conference on a given and different theme each month to discover or rediscover a part of the cloister or the abbey.
* In the Cistercians, the snack was the reading-debate for which the community gathered in the afternoon. His name is taken from one of Jean Cassien's books: snacks (which means lectures).

When:
The second Saturday of the month at 3.30 pm. Except July and August.

Timetable of the Cloister of Cadouin - 2022

Admission 1 hour before closing time. Closed on 25 December and 1 January. *Closed on Mondays except during school holidays and public holidays.