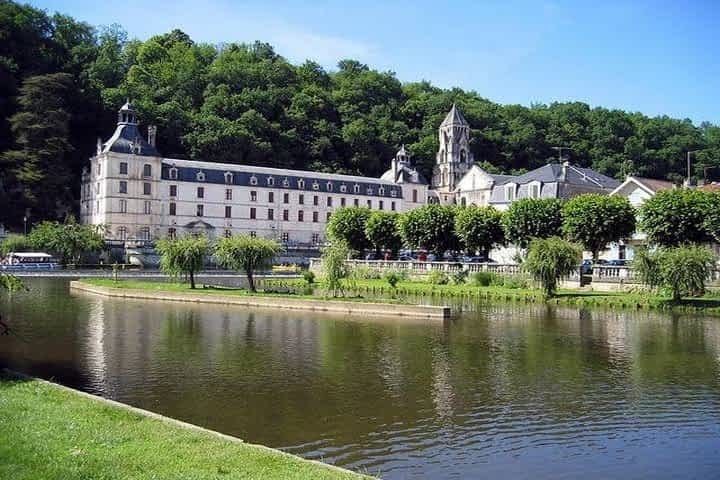 Brantôme also named Venice of Périgord is located in Périgord Vert north of Périgueux. It has beautiful monuments to visit, pleasant to live, flowered with beautiful gardens. Probably one of my favorites!

To visit, the Site troglodytic of the Abbey of Brantôme: a course that shows traces of occupation of the first Benedictine monks from the 8th century. Houses, Dovecotes, Fontaine Saint-Sapalo, carved grotto called "Cave of the Last Judgement" where two bas-reliefs are found, one very enigmatic. Annual closing in January.

Abbey of Saint-Pierre de Brantôme : A rectangular plan church composed of three bays, two for the nave and one for the choir, rebuilt following the Hundred Years ' War. The ensemble is capped with three Angevin vaults with a very bulging profile. It is dated from the fifteenth century and is placed under the double term of Saint Peter and Saint Sapalo, one of the innocent Saints of Bethlehem killed by order of King Herod according to the Gospel of St. Matthew. A fragment of the child's relic is preciously preserved within the church in an elegant shrine. Located on one of the many secondary axes coming from Vézelay and leading to Santiago de Compostela, Saint Sapalo was venerated by many pilgrims. The nineteenth century saw its ranking on the list of historical Monuments but also its restoration by the architect Paul Abadie (1812-1884).

Dolmen of Peyrelevade: Peyrelevade means "stone raised" in Occitan. Erected on the right bank of the Dronne River. Heavily redesigned at the end of the nineteenth century, it was built to house a collective burial: limestone pillars, an irregular natural stone cover.

Canoe rides on the Dronne, relaxation, sports, cultural activities, everything is there! A small town not to be missed under any circumstances.

Castles and manors of Périgord
17 km