Skip to Content
What are the colours of Périgord?

Périgord comes in 4 colours: black, purple, white and green. Historically, we can find traces of these names in old books, the black Périgord refers to the forest (dark), sometimes also to the truffle. The white Périgord refers to the chalky and chalky soils which appear in the landscapes, the green Périgord is characterised by its meadows and finally, more recently, the purple Périgord has been named after the wine because it is home to many vineyards. 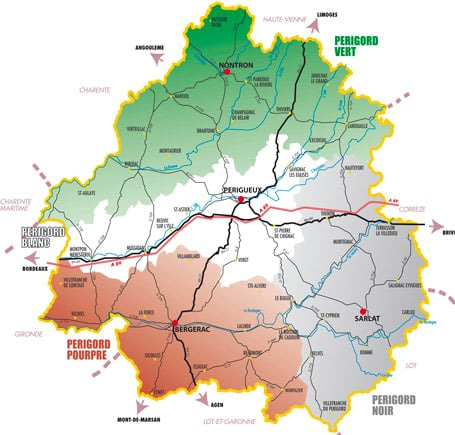 What is the difference between the Dordogne and Périgord?

Today Périgord and the Dordogne department are synonymous and designate the same territory. During the French Revolution, the National Assembly decided to create the departments in order to simplify France's administrative organization. The criteria used for the names of the departments being geographical or hydrographic, Périgord thus receives the name of its main river: the Dordogne.

Where is the Périgord?

Périgord refers to the Dordogne department, located in southwestern France in the new Aquitaine region. It is bordered by the ramparts of the Massif Central to the north, the Causses du Quercy to the east, the orchards of the Lot et Garonne to the south and the Gironde gravel to the west.

Where is the Dordogne?

Dordogne is synonymous with Périgord, located in the South-West of France in the new Aquitaine region. The Dordogne is bordered by the ramparts of the Massif Central to the north, the Causses du Quercy to the east, the orchards of the Lot et Garonne to the south and the gravel of the Gironde to the west.

What is the Black Périgord?

The Périgord Noir is located in the south-east of the Dordogne Department: Sarlat is the capital, you will also find the following villages there: Montignac, Les Eyzies, Thenon, Terrasson, Belvès, Domme, Le Bugue, Saint Cyprien, Villefranche du Périgord, Hautefort. It refers to its wooded cover with dense foliage making the undergrowth dark. For convenience, black is also associated with truffles, but the presence of this precious fungus would not be at the origin of the appellation.
The Périgord Noir is made up of the Vézère valley and the Dordogne valley.
The Dordogne, Vézère and Céou rivers irrigate this region

What is the Périgord vert?

The Périgord Vert corresponds to the northern part of the Dordogne, it is a very hilly part covered with meadows and to a lesser extent with oak forest. Nontron, Brantôme, Ribérac, Lanouaille, Thiviers and Saint Pardoux la rivière are municipalities in the Périgord vert. It is currently a tourist appellation that includes the Nontron region and the Dronne valley. The Côle, the Auvézère, the Dronne and the Belle flow in this part of the Dordogne

What is the Périgord blanc?

The Périgord Blanc corresponds to the centre of the Dordogne department, its name comes from the white colour of the limestone rocks of the landscape. Périgueux is the capital of the Périgord Blanc, you will also find the villages of Vergt, Mussidan, Neuvic, Saint Astier, Montpon ménestérol and Sorges. To white is referred to the stones of monuments and dwellings, the white stones that appear in cultures and limestone quarries (Saint Astier).

What is the Purple Perigord?

The purple Perigord located in the southwestern part of the department takes its name from the purple colour of the autumn foliage of the vines and the colour of the wine. It is a recent appellation that has complemented the Department's other three colours.
Bergerac is the capital of the region. It is also the Country of the Bastides: Beaumont du Périgord, Issigeac, Monpazier, Lalinde and Eymet...

What are the names of the inhabitants of the Dordogne?

What is the origin of the name Dordogne?

The Dordogne is a 483 km long river that originates in the Puy de Dome. Two small streams, the Dore and the Dogne, join to form the Dordogne. Yet the etymology of the word Dordogne does not come from this union. Its name comes from "Durãnius" which means torrent or stream (in the same way as the Durance) and which evolved into Dordonia (9th Century) and then into Dordogne.

Can you swim in the Dordogne?

The Dordogne is one of the cleanest rivers in France, in summer, its temperature is very mild and it is rather calm, it is shallow in many places and has many beaches on its banks. Of course, all swimming safety instructions must be followed.

Abyss of Proumeyssac or Padirac?

We tend to confuse these two chasms because their names are similar. The Proumeyssac chasm is located at Audrix in the Dordogne (Périgord Noir) and is a small but interesting chasm.
The chasm of Padirac is located in the department of Lot in Quercy. It is the largest abyss in France and the most visited, it is absolutely necessary to go and discover it if you live nearby.
Discover here the Proumeyssac Abyss
Discover this is the Padirac Abyss

What is the surface area of the Dordogne?

The Dordogne has an area of about 9000km², it is the third largest department in mainland France. (the largest department of France is the Guyana which is a must see). In its longest length, from north to south, it has 126 kms and its greatest width is from west to east: 116 kms. And as an additional info, a density of 43 inhabitants per km².

What is the prefecture of the Dordogne?

Périgueux is the prefecture of the Dordogne, there are also three sub-prefectures: Bergerac and Sarlat la Caneda and Nontron.
Please note that you may not be able to carry out all your administrative procedures in the sub-prefectures, for example you will have to go to Périgueux to renew your driving licence.

This site uses Akismet to reduce unwanted traffic. Learn more about how your feedback data is used.