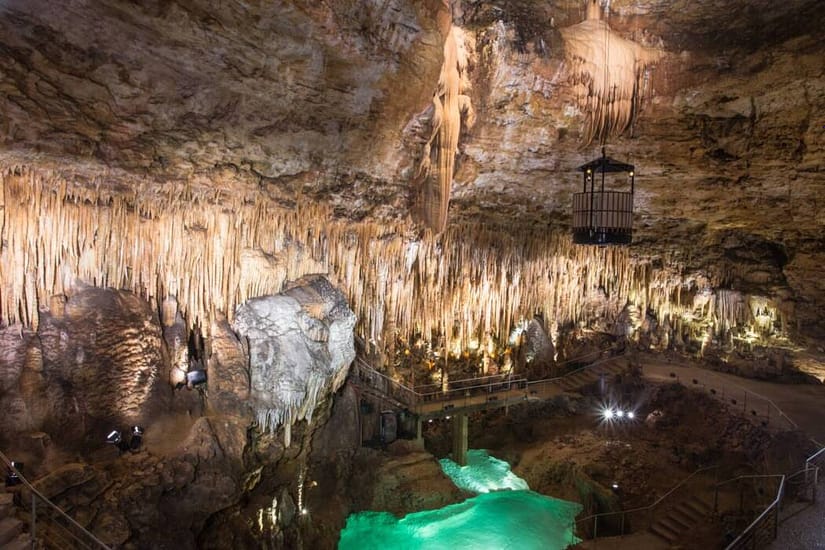 The chasm of Proumeyssac: The largest cavity in Périgord.

History of the Abyss of Proumeyssac

Already in the 18th century, The Chasm of Proumeyssac is known in Dordogne For its terrifying legends: there is a steaming orifice on the heights of the small village of Audrix at the edge of the path by which we would have seen the flames come out. This hole is naturally nicknamed "the Devil's Hole", some even think at the time that this hole of" Proumeyssat "would be the crater of a volcano.
Moreover, this place enjoyed the reputation of disappearing the corpses of the robbed travelers and assassinated by the bandits.

Multes times the orifice was clogged, but the time doing its work, the hole always ended up discovering itself again. It is this access from the top that makes Proumeyssac a chasm and distinguishes it from a cave. It was in 1907 when we hardly spoke of this hole, that the last cork built collapsed, it was then that a driller of the country (Gabriel Galou) at the request of the owner of the land (Pierre Frances) undertook the exploration of the chasm on March 10 1907. By means of rope and summary lighting. Thus were discovered the splendours of the chasm of Proumeyssac.

From then on, there were safe visits in the nacelle by group of 3 people from all over the world, this is the beginning of underground tourism in Proumeyssac.

Gradually, the place is better and better developed, a lighting using a generator is set up, we decide to set up a tunnel on the side of the hill to access feet inside the chasm, a heavy construction site is set up , a 112 metre tunnel is dug into the rock, and no less than 400m3 of debris from scree are excavated: Inside the rocks there are bones of animals and humans as well as bronze pieces with the effigy of François 1er. All these treasures are now exhibited at the Abyss Museum.

Geologists and speleologists think that under the abyss, there would be another cavity larger than the first but all attempts to update it have for the moment failed.

Visit the chasm of Proumeyssac

Unique visit and presentation: 2 Sounds and light highlight the "Cathedral of Cristal".

Through the tunnel you can easily reach this immense subterranean vault with walls adorned with a multitude of crystallizations of exceptional density and beauty. The new highlight of the Abyss, supported by a musical accompaniment completes the originality of this site.
The visit of 45 minutes, commented by experienced guides, leaves an imperishable memory.

For an even more original visit: option of descending in a gondola (11 people maximum, with extra charge) to relive the sensations of the pioneers of the Proumeyssac chasm with this spectacular 360° discovery over 50 metres.

The large free and free park, reserved for our visitors, has an educational space in the underground mode.

Playful stations allow the whole family to make geological experiments, to go back in time or to learn to caving through a specific playground.

On the rest of the park many facilities are available to visitors:

Animations: to learn while having fun!

The River of Minerals: an animation for families

With his "cart" fitted out as a laboratory, Professor Geopole will be travelling around the edutainment park to show the public his fun experiments. His mission? To show budding geologists how the soil of the Périgord was formed, how the Proumeyssac chasm was dug and how concretions are formed: stalactites and stalagmites. For example, in a few minutes he will demonstrate the digging of the chasm with water, sand and a simple and clever system.

With the professor "Geopole", geology will no longer be a mystery...

a set of interactive tools designed to help visitors discover and understand the riches of the underground world and the Proumeyssac chasm:

In a cave setting, discover the history of the Proumeyssac chasm, from the legends of the 18th century, through the history of its discovery and its opening up to the present day.

We are waiting for you to enjoy an unforgettable visit to the chasm of Proumeyssac.

In times of high traffic (July and August), it is strongly advisable to reserve to avoid waiting. Any entry reserved by telephone or internet is kept for up to 10 minutes before the scheduled time of the visit.

Open from 1 February to 31 December