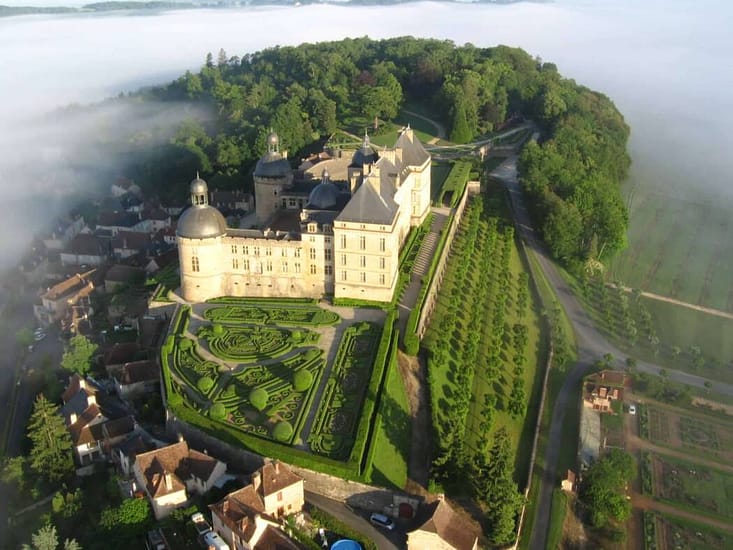 Welcome to the Château de Hautefort

Located on a rocky spur, the Hautefort Castle is an old medieval fortress transformed in the 17th century by the marquis of the name into a pleasure dwelling.

Embellished in particular by the addition in the 19th century of a French garden and a landscaped park, it is a unique site in the Périgord which combines the splendour of nature and the majesty of architecture with a culture of refinement inherited and transmitted over time.

This place steeped in history, preserved and restored by its various owners for over a millennium, can still be visited today. It is the fruit of a family's strong commitment to one value: beauty.

The Château de Hautefort is the story of a passion: bought in the first quarter of the 20th century by Baron and Baroness Henry de Bastard, it was restored with care and devotion. After the main building was destroyed in a fire in 1968, the Baroness, now a widow, worked tenaciously for a second restoration, carried out in conjunction with her family, the public and with the support of the local authorities and the Ministry of Culture.

The Fondation du Château de Hautefort, created in 1984, then recognised as a public utility in 1990, has made it possible to guarantee the durability of the estate, to ensure its management, but also to share its beauty with as many people as possible.

Through everyone's commitment, the Château de Hautefort bears witness to the generosity and love of the public for its heritage. The unique and collective history of Hautefort continues today in a thousand ways: hosting film shoots, themed guided tours, an experimental vegetable garden, workshops on biodiversity and sustainable management which earned it the first eco-label awarded to a cultural site. In Hautefort, beauty can be inhabited, visited and exists loud and clear.

During the summer, cultural events are offered to visitors, such as night-time events on Wednesdays in July and August.

FROM MARCH TO NOVEMBER

Treasure hunt in the castle gardens. Reception at 2pm and start of the animation at 3pm.

See you in the garden. In the company of the castle gardeners - Boxwood pruning demonstration, guided tour with the head gardener and cutting workshop for children.

- Show on the theme of ecology. From 7 years old. Monday 19th July at 4pm. Storytelling, music and dance "You won't go picking daffodils on the Aral Sea" with the company "Théâtre du paradoxe".

- Show on the theme of ecology. From 7 years old. Monday 9th August at 4pm. Storytelling, music and dance "You won't go picking daffodils on the Aral Sea" with the company "Théâtre du paradoxe".

Colloquium "The landscape, a reflection of rurality in the Périgord". On inscription

Halloween" animation and "Pumpkin Kit" workshop. Photo contests and surprises for all children...

FROM APRIL TO OCTOBER

- Drawing workshop " Share the beauty ". Information at the ticket office

- Visit of a movie set, the replica of Louis XIV's bedroom in Versailles. Exhibition "50 years of cinema in Hautefort".

Groups of 20 people and more:
Adults : 9 euros
Children up to 14 years old : 5 euros
Guided tours for groups, on reservation (contact us)

ANIMATIONS (registration on site) Supplement
Accompanied tours 3 €.
Animation of the bread oven by the bakers 4€.

Dozens, hundreds, thousands of little pumpkins are waiting for a large audience during the All Saints' Day vacations.

Don't forget to stop by the food court (seasonal pancakes) and take advantage of the park to take a nice autumn walk and discover the wild cyclamen beds!

Here is something to liven up your vacations ...

The castle is open every day from 2pm to 6pm (ticket office closes at 5:30pm)

Exceptionally during all these vacations: Free kit for people of all ages fully dressed as pumpkins.

Huge puzzle and treasure hunt game in the gardens and park, distribution of chocolates to all participants, special prizes for the big winners in the categories + and - 7 years old!

Castles and manors of Périgord
12 km

Castles and manors of Périgord
24 km