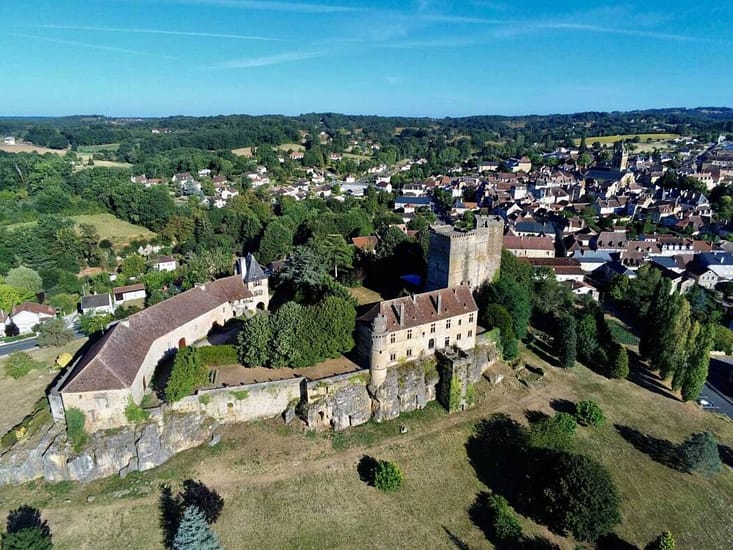 Welcome to the Château d'Excideuil

The castle of Excideuil is located in the north-east of the Dordogne department in the Green Perigord. It is a fortified castle that has been redesigned during its history. This fortress has the only double square keep in the Périgord, softened by a Renaissance châtelet.

History of the castle

The construction of the castle of Excideuil would begin in the 11th century when the viscounts of Limoges, wishing to watch over the road between Périgueux and Limoges, had ramparts and a keep built.

It has a tumultuous history. Over the years it has passed from hand to hand on a regular basis.

In 1182 and 1184 he was attacked by Richard the Lionheart but resisted, he fell into English hands 15 years later when landless John became master of several castles of the Viscounty of Limoges. Around 1210 the castle returned to the viscountcy. During the Hundred Years' War, it was occupied by the English in 1351, it was liberated again in 1356, returned to the English in 1360 and then liberated one last time by Du Guesclin in 1370.

Then came the Wars of Religion, still under the prerogative of the Viscount of Limoges, it returned to Jeanne d'Albret (mother of Henri iv) and briefly passed into the hands of the Protestants.
By marriage it becomes the property of the de Talleyrand family. The castle is then abandoned for decades and it deteriorates...in 1973 a fire devastates the roofs of the châtelet.

At the end of the 20th century the new owners, the Naudet family, undertook rehabilitation work. Today the dwelling and keep are privately owned, while the western part of the châtelet belongs to the commune.

Visit of the castle :

The communal part of the Château d'Excideuil is accessible free of charge all year round: you can wander freely along the ramparts and in the courtyard, admire the panorama over the Loue valley, and discover from June to October in the rooms of the chatelet, the exhibitions of painting, photography, sculpture,... organised by theThe Excit'Œil Associationin partnership with the Departmental Cultural Agency and the municipality.

Open all year round

Castles and manors of Périgord
20 km

Castles and manors of Périgord
21 km