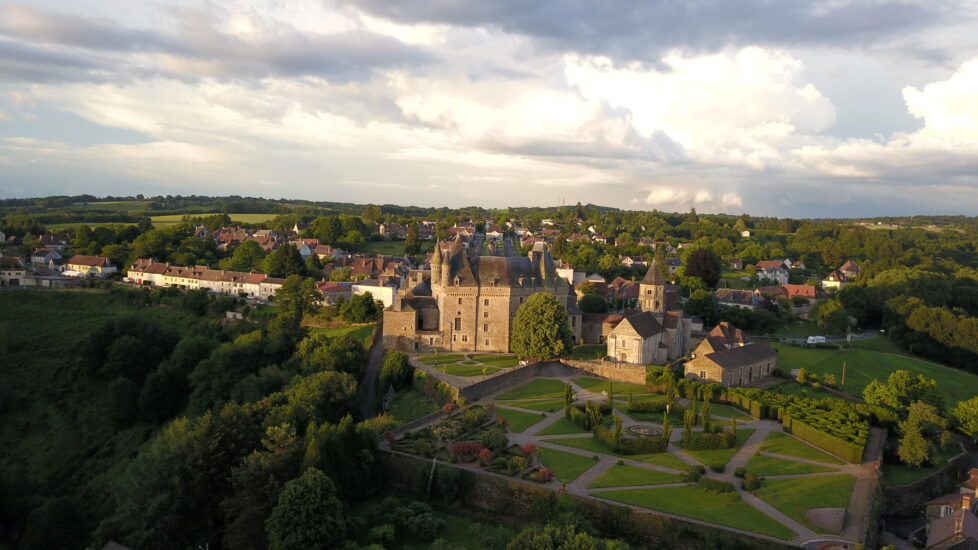 The gardens of the Château de Jumilhac

The Marquis de Jumilhac wanted to modernize his castle in the seventeenth century and draw it from ancestral times. Present at the Court of Versailles, he had to create gardens at the height of his rank; These were 12 terraces which, reshaping the rocky spur serving as a seat to the Jumilhac Castle, descended by degrees to l'isle, running 45 m below.

The Gardens of Jumilhac Were preserved until the dawn of the twentieth century. Alas, the vagaries of the first war were going to carry this titanic work to the point of seeing them sold little by little to the profit of vegetable gardens, orchards or pieces of wheat, as well as the 120 orange trees in a BAC and even... The Orangery! Alone, the first two terraces overlooking the valley where the deer's bells ring in the autumn remain attached to the castle.

In 1995, the drought of the summer revealed a cross of St Andre who drew the diagonals of the square of grass forming the 2nd terrace. This witness of a more glorious past incited the current Marquis de Jumilhac to kick off a large project to renovate the gardens as presented in the model of the castle dated 1777.
Reorganized around the central basin respecting the concepts of the Renaissance and the principles of ours, they retrace two mysterious themes associated with the history of the places: gold, exploited 6 centuries a.v. B.C. by the Lemmovices, and Alchemy, studied by the the budding siderurgist Antoine Chapelle, 1st Earl of Jumilhac (1597).

Thus, the Ors of a garden in their symmetrical aspect, reveal through flower beds protected by a bower, a vegetable maze and its darkroom, a rose garden bordered by trimmed box (renovation in 2011) and a mini solar system to Flowering planets, two fabulous worlds at the origin of hopes, wealth, discoveries, knowledge, techniques,..., but also follies, disillusion, miseries, conflicts and persecutions!

Then go to their meeting from April to November, free and/or playful access (quiz)... on the steps of Antonio Capello!

Castles and manors of Périgord
0 km

Castles and manors of Périgord
18 km

Castles and manors of Périgord
20 km