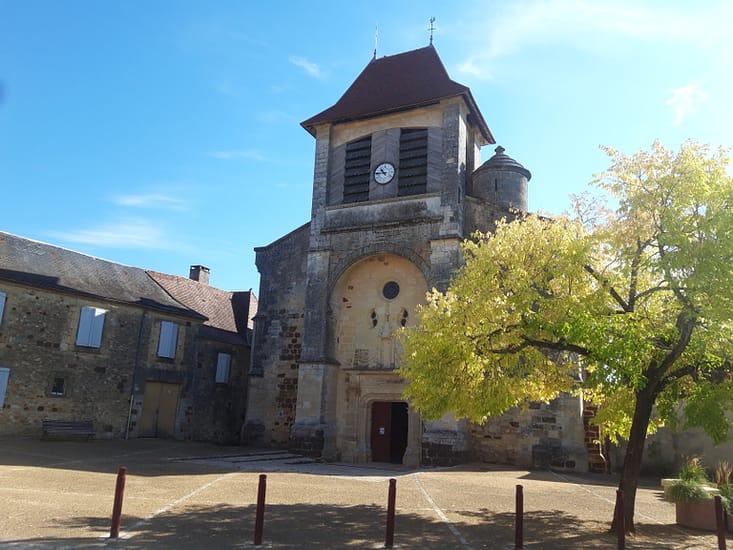 The church of St Germain de Rouffignac has been listed as a historical monument since May 1900.

It was built between the 15th and 16th centuries, with the end of the work established in 1530 (medallion on the façade). It is the only survivor of the village with two adjoining houses from the 1944 fire.

The building is characterised by its combination of Romanesque/Gothic styles, as illustrated by its façade and its remarkable portal, despite the damage suffered during the Revolution. The nave presents interior elevations of great homogeneity in their architectural treatment, and its particularity rests in particular on its pillars with engaged columns, decorated with twisted mouldings with sculpted grooves. Another characteristic element of the flamboyant style of the 16th century is the spiral staircase leading to the bell tower and the gallery. Like the mural paintings in the heart, the stained glass windows date from the 19th century; they were made in the very famous Toulouse workshop of Louis-Victor Gesta, between 1862 and 1893. The imposing Stations of the Cross, in its carved wooden frames, dates from 1895, and the original bells have known their fate during the Revolution, the foundry of the arsenal of Montauban, with the exception of the Big Bell, blessed on September 13, 1751, but kept, by decision of the Dordogne Council of October 12, 1793 to "be able to ring the bell...".

To the right of the entrance, an openwork staircase leads to the gallery and the bell tower.

Castles and manors of Périgord
10 km