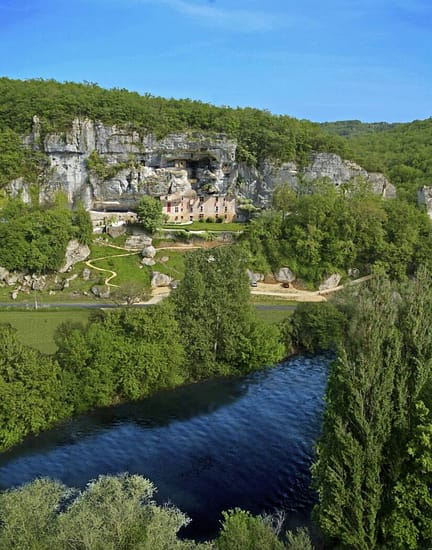 The Strong house of Reignac is kept in an exceptional State Since the 14Th century and entirely of period. Very well known in the region, it is in France the only monument of type "Castle cliff" troglodytic (i.e. laid out in the rock) totally intact.

Classified historical monument, it is in the most strange, the most secret, the most mysterious Dordogne, it seems even that it is haunted...

Much larger than one can suspect seen from the outside, its façade embedded in the cliff hides impressive underground and aerial rooms: Great Hall of honor, room of arms, dining room, Hall of the great men, kitchen, rooms, Chapel, Dungeon, bass-pit butt (forties), cellar.

After travelling all over the world, an internationally renowned permanent exhibition on the theme of torture from the middle ages to today now sits at the strong House of Reignac. A collection of more than sixty instruments of authentic torture, of capital execution as well as engravings and period paintings, presents the terrible history of horrors and human cruelty. If the instruments exposed, as such belong to the past, other more diabolical and more sophisticated are created and still used nowadays.
The objective of the exhibition is to raise public awareness of the practice of torture today in the world.

Every day from February to November 30th and Christmas holidays.

All holidays in February and March: 10am-6pm