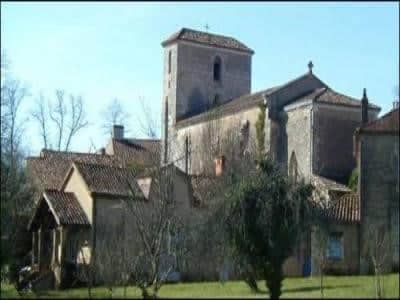 Welcome to Saint Mayme of Pereyrol

Everything suggests that the current name of the village "Pereyrol" comes from "Pereyrou" which means Rolling Stone Due to the presence of a very stony soil, and "Mayme" comes from Maxim who was the patron saint of the commune before the revolution. Maxim's "X" was poorly transcribed... Then turned into "Y"... Maxim's "I" becoming useless to him disappeared...

It was also the stronghold of Pierre Grellety, chief of the crisps of Périgord between 1638 and 1641 (commemorative plaque on the corner of the town hall affixed on 14 May 1967).

It was at the hamlet of Martens that a barbarian cemetery was discovered in 1967, where the Merovingian tombs (5th – 8th century) are buried. Nearby we find a Ford tower that dates from 1800.

The Church of Saint Maxime, a Romanesque-style building dating from the IXème century. Destroyed in part in the tenth century during the barbaric clashes, was rebuilt, in particular its 17-metre steeple, during the 11th century. Inside besides its carved wooden altarpiece dating from Louis, there is a large painting called "Admiration of the Shepherds", given by the Emperor Napoleon.
Seven Calvarys around Bourg testify to a busy historical past.
The fortified steeple of the Church of Saint Maxime, in Saint Mayme de Pereyrol, offers all the characteristics of the "steeple-wall" with a defensive vocation.

This church testifies to the turbulent history of the region, from the Hundred Years War to the wars of religion, through the medieval wars between rival lords...

It is in the Middle Ages that churches evolve into real strongholds where people can find refuge in the event of enemy attacks.

It is in this context that the parishioners of the Romanesque church of Saint Mayme of Pereyrol endow the building with a rectangular high steeple. This one is devoid of deadly and only bays are pierced at the top of the wall for the location of the bells.

The St Mayme de Pereyrol Pumpkin Fair is held every year in mid-September. It is a traditional event marking the life of the village.

It is a day under the sign of crafts with demonstrations, animations for the young audience, the folklore group will invite you to dance, and you can take a break under the marquee to restore you.
Surprise animations. Market-Gardening Exhibitors happy to offer you their seasonal vegetables. The Baker (O'bio Pain) will revive the village's Wood kiln, the fruit juice pressed on the spot, animal exhibition, painting exhibition within the church.

On-site catering. Free. Join us for a day out of family time. Discover the riches of Périgord Blanc.

Castles and manors of Périgord
9 km