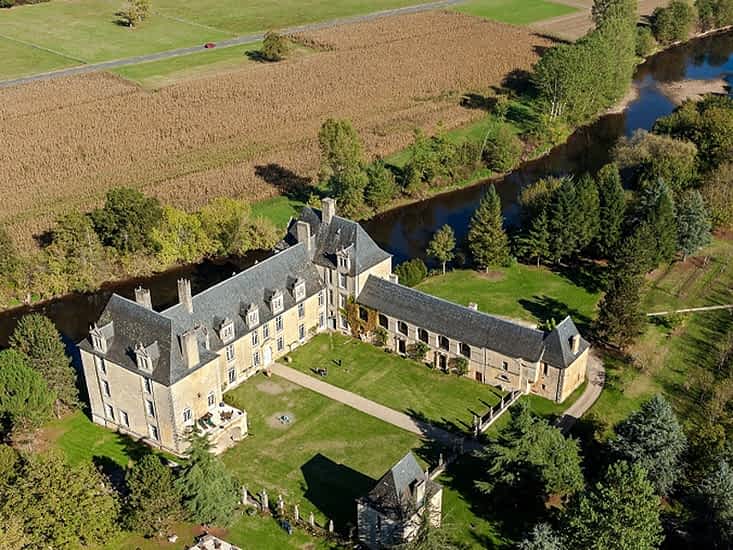 According to early written sources, the castle of Sauveboeuf would date from the middle of the 14th century. We know then that the castle became the property of the De Ferrières family, vassal of the lords of Montignac. At that time, the castle was to be a fortified country house whose purpose was to protect Montignac. Over the centuries, and until the middle of the 18th century, the De Ferrières family developed within the French nobility.

In 1743, the estate passed into the hands of Victor Riquetti, Marquis de Mirabeau, father of the famous French revolutionary, and belonged to the family for about sixty years. During the 19th century, the building belonged successively to the Chassagnac Latrade, Dehÿs and Baillemont families. In 1891, the Oberkampf family, famous for its fabric factory in Jouy (Jouy-en-Josas), acquired Sauveboeuf and carried out major renovations. The Oberkampfs sold the castle in 1927.

The castle was an agricultural estate until 1975 (notably with the Gengen family), then abandoned until the Douce family bought it in 1987.

Château de Sauvebœuf has been open to visitors since April 2013.

Visit of the castle (1h)

The Château de Sauveboeuf is in the Louis XIII style. It has a Renaissance terrace overlooking the Vézère which alone is worth a visit.
The vast rooms of this illustrious residence feature period furniture, a monumental white stone staircase, a cabinet of curiosities: the diversity of the collections of Mr. Douce, the owner, will certainly fascinate you.
the visit can be free or guided

Visit of the Museum of Prehistory (1H30)

The vaulted cellars of Château de Sauveboeuf are home to one of the largest private collections of Prehistory in the world.
From the Erectus to the early Neolithic period, discover the evolution of man through different prisms: his environment, his innovations and his conflicts. Nearly 500,000 pieces, including mammoth ivory ornaments more than 20,000 years old!
Guided tour of the Museum of Prehistory, duration 1h30. Exclusively guided tour.

An ideal place for your reception....

In the heart of the Périgord Noir and overlooking the Vézère, Château de Sauveboeuf, a 17th century setting, will allow you to receive your guests for unforgettable moments.

For a weekend, experience the life of a castle in this Louis XIII style residence steeped in history.
The "Nicolas Rambourg" Hall is an exceptional place, it offers you a splendid view of the main courtyard and the main building of the castle, thanks to its six large bay windows.
Equipped with a communicating room downstairs, you can dance and celebrate your event easily.
For more information, do not hesitate to contact us!

Annual closing of the castle from October 19, 2019 to early April 2020
Closed on Saturday & Sunday

The Halloween monsters are taking over the castle!

As every year, Halloween nights will be marked by a great gathering where all the nocturnal creatures accompanied by a horde of horrible servants will invade everything, populating the dark castle lost along the lugubrious Vézère.

Let yourself be transported to the life-size setting of a haunted castle.
Two circuits are available so that everyone can come and put their courage to the test. And don't forget to come in costume!

Every day from 3pm to 6pm and 8pm to midnight.

All ages, but not for the faint of heart.

Castles and manors of Périgord
13 km