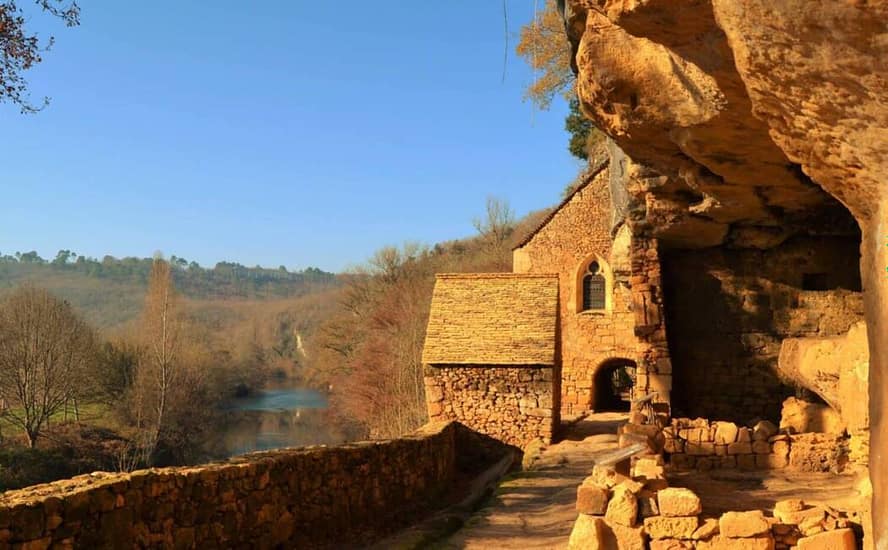 La Madeleine Grand site: an invitation to go back in time...

Exceptional natural site, among the best preserved of the Vézère Valley, the Madeleine attracted the man from prehistory to the present day.
At the foot of the cliff, 17 000 years ago, our semi-nomadic hunter-gatherers ancestors settled there. The prehistoric deposit of the site gave its name to this civilization of prehistory: the Magdalenian.

The exhibition traces the great discoveries of the archaeological site: the mammoth engraved... in the ivory of Mammouth, the burial of the child of the Madeleine, whose adornment is made of more than 1150 shells pierced... And of course, the masterpiece that represents the pinnacle of the art of our Cro-Magnon ancestors: the bison "who lick their flank".
Halfway up the cliff, you will discover a medieval troglodytic village. It has been inhabited since the High Middle Ages until the end of the nineteenth century. Among the buildings dug in the rock, a remarkable Gothic Chapel of the fifteenth century, as hung on the cliff. On the upper floor, on the limestone plateau, are the remains of the Château de Petit-Marzac, built in the 13th century.
Here, the eye of the spectator will note with humility the know-how and ingenuity of these rural "troglodytes" who have benefited from their natural environment (stone, wood, water and farmland) to build their refuge there. In these times when we ask ourselves about the use of our resources, to come and draw inspiration from what has been done to the Madeleine can serve as an example for our future.

In the heart of the Périgord Noir, the village of la Madeleine welcomes you all year round: family visits, groups or guided schools. Visitors also have a picnic area with a wonderful view of the Valley.

New this year! The creation of a dozen ruchers-trunk, to preserve colonies of bees.

Prepare to live an extraordinary journey, which will lead you from prehistoric times (-17 000 years) to the present day, passing through the middle ages... Good visit !

The site is open from March 1st to November 15th.

Duration of the visit: 1 hour