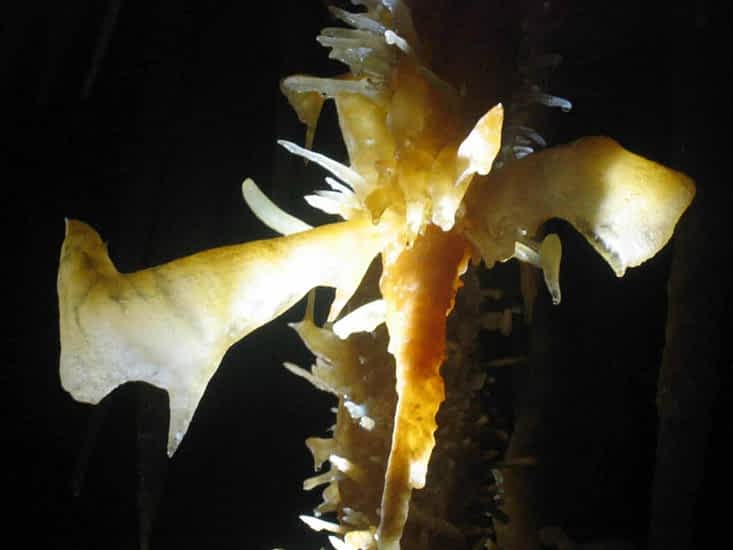 The Caves of Maxange, in the valley of the Dordogne are surprising in more than one title.
Because of their history already, which is not trivial.

The discovery of the Maxange cave

In 1984, Angel Caballero decided to take over the family business, a stone quarry opened by his father Maximilien in 1960 in the commune of Le Buisson de Cadouin. 16 years later, in 2000, Angel sees a strange fault in the cliff. He doesn't know it yet but this fault will change his life and that of his family.

After a few weeks of hesitation, he decides to infiltrate this mysterious hole. After only a few meters of difficult progression, a breathtaking gallery is offered to his eyes. It's August 15, 2000.

On the other hand also because of their exceptional diversity in concretions: Stalactites, stalagmites, numerous aragonite panels covering entire walls, and extremely fine fissures.

But what leaps to the eyes is this unique profusion of rare, so-called "eccentric" crystallizations, which literally defy the laws of gravity. Usually observed in small quantities, they are seen here by the thousands on nearly 90 meters.

After a long reflection, Angel decides to do everything to make this place unique accessible to all. But turning a career into a home site to the public is not an easy task.
It will take almost two years to build the exteriors and make the interior accessible.

In 2009, a new gallery is open to visit but everything has still not been explored and we like to think that new discoveries are coming.

In 2013, the State decided to classify the caves of Maxange for their geological and picturesque character and the Michelin guide awarded them two stars.

Today, Maxange is a site that delights young and old alike and is recognized as one of the most beautiful concretion caves in France.

Angel Caballero decided to name the cave  Maxange In remembrance of his father who started the quarry, indeed, the contraction of Maximilian, his father's first name and his.

The visit of the cave and practical information

The visits are accompanied by a guide who will explain the discovery of the cave but also its geology, the formation of galleries and concretions and many anecdotes. The visit of the caves of Maxange lasts 40 minutes. The temperature in the cave is 13°C.

On site you will be able to enjoy a bar with a shaded terrace, children will have access to a playground.

The shop in the reception hall will offer you a whole collection of minerals in different forms: rough stones, polished stones and jewellery. You will also find a whole range of souvenirs from the Périgord.