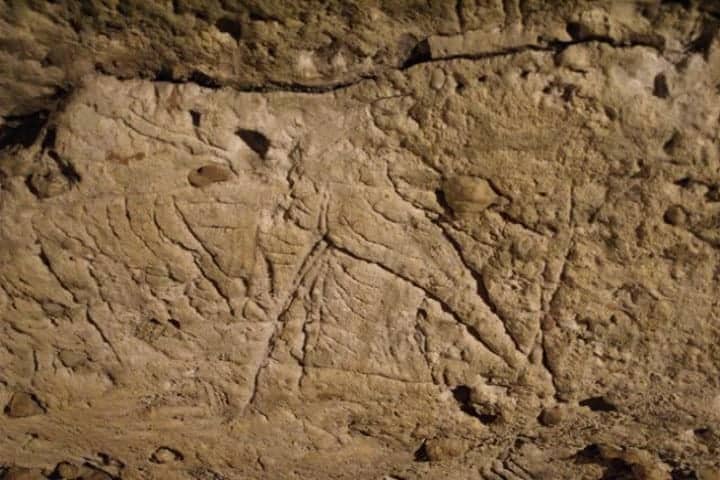 The cave of Bara-Bahau (or Bara-Bao), one hundred metres long, is one of the ornate caves of the Vézère Valley (Dordogne, France).

It is of geological interest, particularly by its eccentric concretions, and predominantly prehistoric, by the wall engravings it contains. It takes its name from a local Occitan onomatopoeia which means "Badaboum" in reference to collapsed blocks visible in the first room. Private property open to the public, it was classified as a historic monument in 1961

THE ENTRANCE TO THE CAVE

Once called the hole of the Cocagne, the entrance to this immense cavern was a picnic place known to the locals and very appreciated. Maud and Raoul Castert, adventurers and speleologists, were invited in 1951 by Marcel Maufrangeas, President of the Union of initiatives of Bugue, to explore the most secret depths and it was, lying on the ground, that Maud saw the first engraved traits: A horse and then a cow "with beautiful horns". In all she discovered that day sixteen engravings of very beautiful size

At the bottom of the gallery, the cave bears hibernated to the narrowest place. Under their plenty, the first artists crawled to go and plot lying, on the knees and then standing, three gigantic frescoes of animals of their time: aurochs, bison, reindeer, prehistoric horses, all engaged in a mad race until Depths of the cavity. A masterpiece of cave art to be seen in the original version at BARA-BAHAU.

-20% off for visitors to Le Bournat on presentation of the entrance ticket.

From Saturday 22 October to Sunday 6 November Open every day except Monday, from 2pm to 5pm.