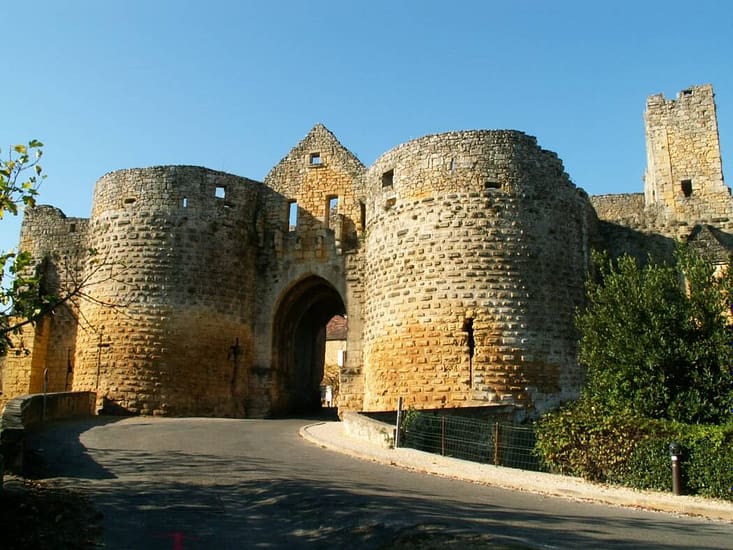 You can't come to Perigord Noir without making a detour to Domme.

Domme is a bastide, i.e. a small fortified town with a regular plan, created from scratch in the Middle Ages in the south-west of France. Typically, the streets of Domme intersect at right angles, the squares are square, there is a large market hall and the town is fortified. It was Philip III, known as "le Hardi", who created Domme, he decided in 1281 to create a bastide at the top of a cliff overlooking the Dordogne valley.

Domme is remarkably well preserved, the ramparts and large gates that once surrounded the city are still largely present. The stone houses have a cachet like nowhere else. A unique architectural heritage including its ramparts and the Porte des Tours (Tower Gate) in which the imprisoned Templars made engravings, still visible today.

No matter where you come from, you will arrive from the bottom of the city and leave your vehicle outside. The visit of Domme is done on foot, you can also discover the city by little train with a commented tour.

After passing the Great Hall, under which is the entrance of a huge natural concretion cave where stalactites and stalagmites abound (there is also the tourist office), you will arrive at the square shaded by plane trees and discover the Belvedere of the bar. A breathtaking panorama. You will dominate the Dordogne valley from a height of more than 100 metres and despite the hills in the distance you will have a view over dozens of kilometres.

It will then be time to go and rest on the terrace of a café, and eat a home-made Perigord strawberry ice cream.

In the South of the Périgord Noir and at the gates of Quercy, the Pays de Domme offers a wide choice of discoveries and activities.

At 2.30 pm Public garden, egg hunt organized by the holiday Committee of the Bastide of Domme & the secular friendly of Domme-Cénac.

Castles and manors of Périgord
8 km