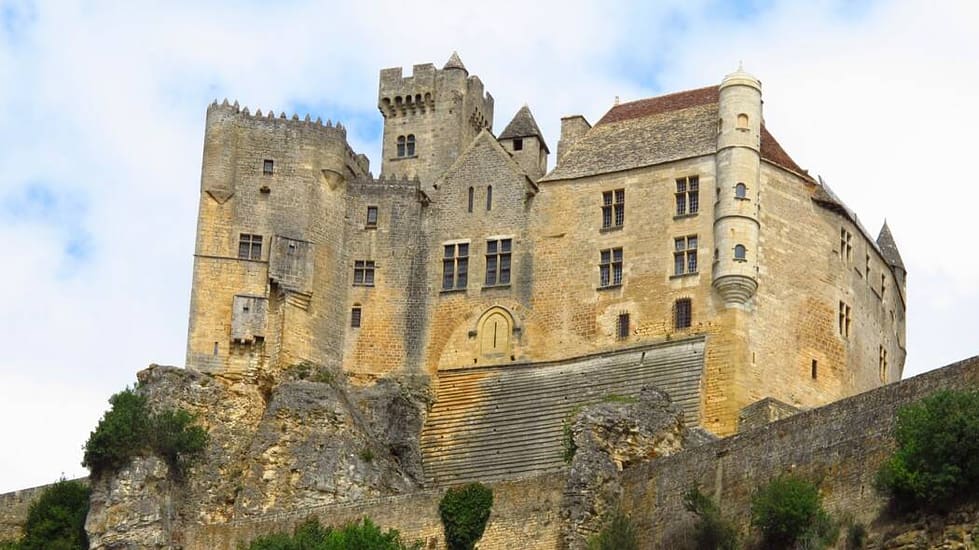 Welcome to the Château de Beynac

The Castle of Beynac is one of the best preserved and one of the most famous of the Périgord.
It was built in the 12th century by the barons of Beynac who control from this place the roads and navigable waterways of the Dordogne. The transporters had to carry out a right of passage to the Lord of Beynac, thereby reinforcing the economic power of the latter.

During the Hundred Years War, it served as the French stronghold, the Dordogne serving as a border between France and England, it faced the Chateau de Castelnaud Taken by the English.

The castle consists of a Roman square dungeon adjoining a logis. It was classified as a historic monument in 1944.

You will discover during your visit, the hall of the adjacent guards at the dungeon, the room of the states of Périgord which served as a meeting room for the baronies (Bourdeille, Biron, Beynac and Mareuile), the terrace of the spur with its breathtaking view of the valley of the Dordogne, the kitchens with their imposing chimney and the Barbican an advanced fortification designed to protect the main entrance of the fortress and to slow down the enemies.

From April to October, guided tours included in the ticket price

Castle Open all year round, every day
APRIL — OCTOBER
Castle open every day from 10am — 6.30 pm
From April to October, guided tours included in the ticket price
Departures approximately every 30 minutes from 10am to 12pm and from 2pm to 6.30 pm
All day, free visit with booklet delivered to the reception

Guided tour
About 50 min/1 hour, the guided tour carried out by our passionate and exciting guides will enchant you.
Go back in time, at the time of the Hundred Years War, in pursuit of Richard the Lionheart and the Lords of Beynac, following the guided tour!
The guided tour will make you plunge into the heart of the Middle Ages for the delight of the young and the great!

Guided tour included in the ticket price
Last departure 6.30 pm
Free visit
All day without interruption, discover the fortress of Beynac at your own pace with the help of the booklet that will be given to you at the reception.
Good visit of the castle of Beynac, the most authentic castle-fort of Périgord!
Last Access free visit 19:00
NOVEMBER — MARCH
Open every day from 10am-6.30 pm
All day, free visit with booklet delivered to the reception
Annual closing in January